Trekking in Mustang, Mustang is popular as a “Lost Kingdom of Tibet”, landscape similar as Tibetan plateau, in rain shadow of Himalaya with remains of ancient Tibetan Buddhist culture. Behind Annapurna and Dhaulagiri range, a vast barren ridges with sandy plateau which has dramatic change of color depending on season. There are Gurung and Thakali settlements close to Kali Gandaki river at around 2000 to 4000m. Normal tourist lodges and local tea house available. During summer, gypsy’s camp can be seen, grazing their cattle.

The early history of Lo is shrouded in legend, myth and mystery. Teeji festival during May is one of the biggest and special ceremony, so many local people from different villages come to attend it. The terrain is striking, cultivated barley field in dessert, flat roofed village, Chorten and passes with colorful prayer flags, rocky hills with cave like dwellings are the highlights of the trek.

landscape of amazing rock formation which has almost 10,000 man made caves which was a buriel chambers. Later used as a dwelling for people and in later years it is used as meditation (Cham in Tibetan) chambers who would like to be in isolation.

Travel through the Kali Gandaki canyon and crossing over high passes where fluttering prayer flags be seen. Optional possibility to go further and longer route to Damodar Kund (lake) to Saribung (6340m) and Bhrikuti (6364m) peaks for more adventure high treks which comes to Nar valley. 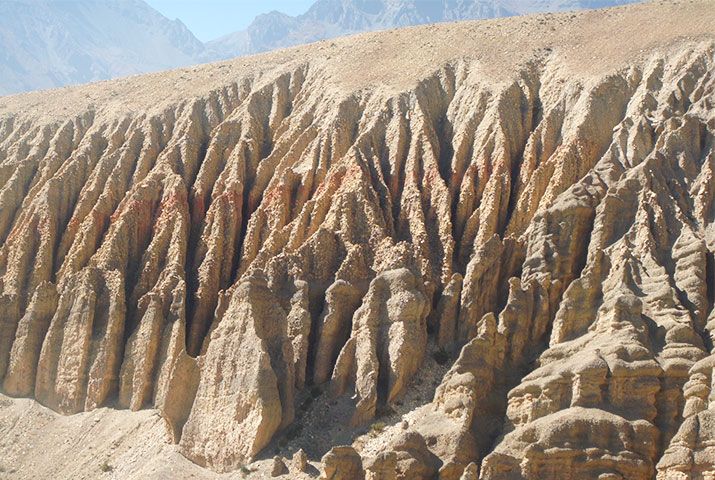 On your choice in lodges
Tailor-made holidays